Thoughts during the Plague № 1. Black vengence of light god. 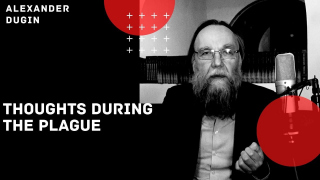 Thoughts during the Plague (A.Dugin)

Thoughts during the Plague cycle of speeches.

Hello, we continue our conversations in the era of pandemics, and today I would like to talk about those indisputable consequences of coronavirus spread in the world, which, it seems to me, have already become apparent.

I am deeply convinced, and this is confirmed by most sane experts both in our country and on a global scale, that this coronavirus epidemic actually represents the end of globalization. All institutions, all mechanisms that should both have prevented the spread of the pandemic, and become immediate reaction in order to somehow localize or neutralize, or cure; all these institutions on which humanity could count and rely by default in conditions of global united world with open borders, with the ideology of human rights and with a common vision of full transparency of all societies; all this failed in a completely shamefull way.

Globalization could do nothing against coronavirus. In the beginning, the attempt to leave everything as is, not to change anything and not to respond to the virus, gave catastrophic results, and all societies, including the most open ones, the most liberal, most globalist: European and American - were eventually forced to just close their borders, implement government control, the state of emergency and actually to rush far, far away from these global institutions that have demonstrated their complete ineffectiveness, inability to respond to any problems and to delegate authority to nation states. Actually what happened in France with Macron, in the United States with Trump, in Germany with Merkel, and even with Boris Johnson in the UK is a return to nation states, imposition of the state of emergency and, as Karl Schmitt said, the state of emergency is necessarily followed by establishing dictatorship. A sovereign is the one, for Karl Schmitt, who makes decisions in emergency circumstances - Ernstfall. Coronavirus brought us the need for Ernstfall, i.e. emergency circumstances and in these emergency circumstances, the ultimate authority which make decisions, the sovereign instance are nation states and their leaders. Here we are!

In other words, as soon as globalization collided with something that represents a real threat for human lives, all spells about open borders, about technocracy, about Ilon Mask, flights to Mars, driverless Tesla cars, Greta Tunberg, all globalist projects and spells disappeared in one moment. In fact, we see how, by contrast, China is effectively acting. Why is China, which was the first victim of the pandemic spread, although, perhaps, the pandemic in other countries: USA, Europe and Italy existed before, just it wasn't detected. China turned out to be the first country where it was identified as an epidemic of coronavirus, this pandemic. And then other countries have discovered coronavirus but it’s quite obvious that the scale and the scope that the spread of coronavirus has acquired in Europe or USA means that this virus existed there for a long time, he just was not diagnosed as such. So, China, which collided to the full extent, first, in a pretty terrifying scale, with this epidemic, China coped with it only thanks to its closedness. Due to the fact that China maintained a political structure governed by the Communist Party, because it was and remains a disciplined, disciplinatory society that was instantly closed, instantly implemented isolation mode, closed Wuhan, closed other provinces, blocked people, forbade movement, imposed a state of emergency on a part of its territories, and in such a way localized the virus and suppressed it. This strict coordinated action of the Chinese model gave an example of how to work with coronavirus. And in the beginning England, Italy, Spain, France, Germany, America said: well, just not the Chinese variant, tried to ironize over the Chinese, but as soon as trouble reached Europe, then it turned out that the measures applied by the Chinese are the only effective way to fight coronavirus.

Some figures being very convinced fanatics and globalists like Giorgio Agamben or Bill Gates still try to convince us that the best way to fight coronavirus is to quickly get infected for everybody, leaving open borders, keeping completely all the system of globalism, well, in some sense it follows from this just quickly to die. Boris Johnson tried during the virus spread week in the UK also to move in this liberal-globalist direction but in that circumstances of the terrifying scale of the tragedy, very quickly rejected this, and was compelled to implement the same national isolation regime, closure of borders, isolation of people, quarantining, sa faced as well extraordinary circumstances. And now today's world is for those who wanted to close their societies, their borders and their people, wanted to impose a state of emergency and to transfer the authority to national state as the highest instance of sovereignty or didn’t want it, but still ended up in a situation of need in the face of the pandemic, since everyone around acted the same way: closed borders closed people and transferred the power from supranational authorities to national. What do we have as a result? We mean that when the epidemic started, before the spread of coronavirus, we dealt with open society, and even if this society was not completely open on worldwide scale, all elites, all leadership of all countries: Russia, and China, even Iran, to a large extent, aside from Western countries, recognized by default that we live in open society that open society is if not something accomplished, as in Europe or America, then an aim to strain after, as for other territories, and therefore in reality nobody called into question basically that anyway liberal democracy and open society is the goal to which all of humanity is moving. No one questioned this. And then the coronavirus came, and it turned out that this goal, this orientation is completely a failed one. This is a chimera that cannot respond effectively to none of the challenges with which it collided. And after that we see the total collapse of open society, because coronavirus is incompatible with open society, as far as we must choose between either coronavirus or open society. And in the beginning those who still tried to say: "Better open society and death", have lost all support because everything, absolutely everything, and even western liberal societies in which this openness has already penetrated in the depth of their unconscious and even them had to instantly break up with it, shouting: "No, if closedness is the choice of life, then we choose closed society.

Here's what happened: we see the closing of open societies and moving from transnational authorities and approaches to economic, social and political processes to national standards. In fact, welcome to the multipolar world! Coronavirus closed open society, completely eliminated the process of globalization, undermined (well, we are separately talk about it) globalist economy, and returned the peoples to national borders. And many will tell me: "Well, these are temporary measures, now everyone will cope with it, invent a vaccine, recover" ... This is a mistake. First, the epidemic will last quite a while. Even the most optimistic forecasts announce a term of six months or even of a year. Many say that it will contaminate all humanity, and there are relapses of this disease. Someone says that synchronously to this virus (firstly, we do not finally know about its consequences, how serious and terrible it can be), there may be relapses, there may be different strains, but in principle, such a precedent already gives evidence to the complete failure of the globalist project.

If a serious problem can be effectively operated by humanity solely in the context of closedness, in the context of national borders, it means that globalization has come to an end and that we enter the post-global world. Accordingly, from the ideological point of view, it is nowadays that we are experiencing a transition from an open society to a closed one, and the longer this fight will last in conditions of a closed society, and only in such conditions it can be conducted, the deeper the institutions of this post-global order will take root. We entered into the coronavirus epidemic as open society, as global world and we will come out of it as multipolar world with nation states as higher authorities of sovereignty. That's what has already done this pandemic. And day after day the irreversibility of this process will become more and more apparent. Those who believe that everything will come back, are deeply mistaken: there is no way back, totally new horizons are ahead, the new world order which is different from the previous one is ahead, naturally different from the bipolar one which collapsed in the 90s of the last century, and from the unipolar one. This multi-polar world, in which China, Russia, strong closed states - even the United States of America - can survive with state of emergency, with Trump, with the imposition of curfew time with patrols troops in American cities with closing, and actually suspension ("suspended democracy"), of democracy and temporary abrogation of civil rights and freedoms or, at least, restrictions - this regime is henceforth dominant of that world order which will take shape faster and faster day after day. So, during coronavirus we are changing one world order: open society, global system for another: for a closed society, a multipolar world with completely different priorities, other value systems and other structures of political governance.

The state of emergency, Ernstfall, it is very very serious and one who is in power in such a situation, is not likely to give it up voluntarily to anyone. This is, let's say, the positive side of the epidemic in which we now live. Of course, it’s important to deal with it, it’s important to survive, but you can’t reduce everything to solution of purely technical issues, it is essential to think about the future. And at the exit from this pandemic we will come across a completely new post-global reality.