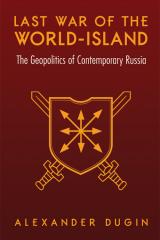 Alexander Dugin traces the geopolitical development of Russia from its origins in Kievan Rus and the Russian Empire, through the peak of its global influence during the Soviet era, and finally to the current presidency of Vladimir Putin. Dugin sees Russia as the primary geopolitical pole of the land-based civilizations of the world, forever destined to be in conflict with the sea-based civilizations. At one time the pole of the seafaring civilizations was the British Empire; today it is represented by the United States and its NATO allies. Russia can only fulfill its geopolitical mission by remaining in opposition to the sea powers. Today, according to Dugin, this conflict is not only geopolitical in scope, but also ideological: Russia is the primary representative and defender of traditional values and idealism, whereas the West stands for the values of liberalism and the market-driven society. Whereas Russia began to lose sight of its mission during the 1990s and threatened to succumb to domination by the Western powers, Dugin believes that Putin has begun to correct its course and return Russia to her proper place. But the struggle is far from over: while progress has been made, Russia remains torn between its traditional nature and the temptations of globalism and Westernization, and its enemies undermine it at every turn. Dugin makes the case that it is only by remaining true to the Eurasian path that Russia can survive and flourish in any genuine sense — otherwise it will be reduced to a servile and secondary place in the world, and the forces of liberalism will dominate the world, unopposed.