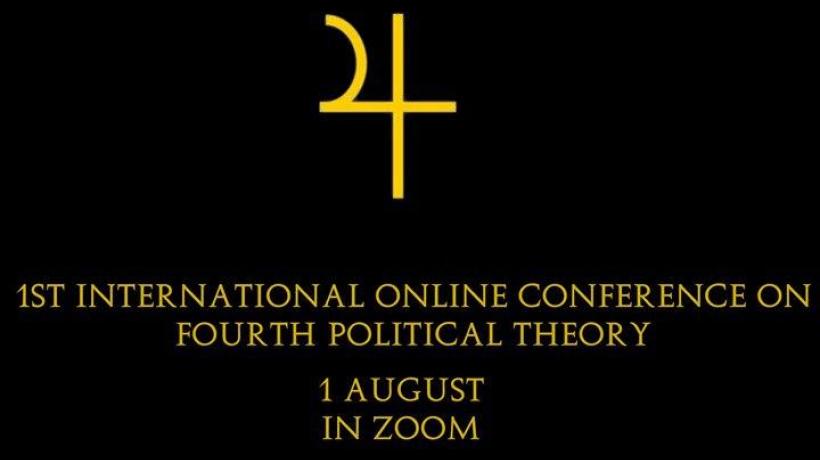 The beginning of the conference:

By the close of the 20th century, the violent battle between the three political theories of Modernity, i.e. Liberalism, Communism and Fascism, ended with the spectacular worldwide victory of the First Political Theory, Liberalism. This yielded the unipolar moment, Francis Fukuyama’s declaration of the “End of History” (as it at least seemed to be so in the 1990s), and globalization. “One World” began to be discernible based on one universal ideology – liberal globalism. In the 1990s, the overwhelming majority of analysts and experts, public figures and political scientists were inclined to believe that henceforth the economy and civil society would gradually replace politics and competition among nation-states. This created a new paradigm of truths and new obligatory epistemological criteria, such as those represented by such trends as cognitivism, techno-science, political correctness, and “LGBT+ culture.” This unipolar moment lasted until the year 2000, after which something went wrong (for the First Political Theory). The 9/11 attack, the gradual recovering of sovereignty of Putin’s Russia, the spectacular rise of China, the populist wave in Europe, and finally Trump’s election marked symptoms of the fact that Liberalism is in trouble, submerged in a crisis that has become more and more serious and irreversible.

But the peculiarity of this process is the fact that against the Liberalism entering into a phase of decay there has been no clear alternative. Communism and Fascism were already irreversibly defeated in the 20th century (1945, 1991) and had no chances of becoming unifying ideological platforms for effectively opposing Liberalism in decay. This created a theoretical void which has by all means helped Liberalism to conserve its dominant position in the international elite establishment and to continue to be the “universal” language of the global economy (free market), politics (liberal democracy), culture (individualism, human rights, the open society, gender and LGBT+ ideology, post-humanism, etc.), technology (cybernetics, robots, post-humanism, Artificial Intelligence, genome deciphering). The obvious decline of the Liberal paradigm has not yielded any space to critical discourse outside of Liberalism itself. Liberalism has thus become openly totalitarian. Any contradiction or opposition is reduced by liberals to “Fascism” and “Communism”, i.e. the Third and Second Political Theories of Western Modernity already overcome by Liberalism during the 20th century. Thus, liberals have a priori reduced their opponents to representing remnants of their defeated, overcome and demonized enemies of the past.

In the framework of this Fourth Political Theorizing, Western Modernity and its ideological content have been “encircled” as a provincial phenomenon representing not the “universal destiny of all humanity” it has claimed to be, but as merely a speck on the much broader scene with limited historical (the 16th-21st centuries) and geographical (Western Europe and its direct or indirect colonies) boundaries. The Fourth Political Theory and its critical theorizing has turned in search of inspiration to mapping and elaborating a field outside of these limits, or to polylogue with radical dissenters inside of them who contest the very principles of Western Modernity (the European Traditionalists such as Guénon and Evola, the philosophers of the Conservative Revolution, such as Romanticist perspectives, Friedrich Nietzsche, Oswald Spengler, Ernst Jünger, Carl Schmitt, Martin Heidegger and so on, as well as drawing upon Jean-Jacques Rousseau, Georges Bataille, Georges Sorel, etc.). This affirmation of theorizing has yielded the realization that the Fourth Political Theory can find support in three main sources:

Thus, it has been proposed that the Fourth Political Theory be constructed extra-territorially vis-à-vis Western Modernity and on the grounds of decisively crossing out all pretensions to universalism. In the 21st century, these pretensions coincide with Liberalism, which holds itself to be the culmination of human history. In the eyes of the partisans of the Fourth Political Theory, the crisis of Liberalism is just one historical episode of the legitimate end of one perverted, decadent and degenerate civilization among many others – real or possible, past, present and future.

Such a theoretical initiative as the Fourth Political Theory demands committing to large-scale ideological cleansing, deconstructing not only the main edifices of liberal political philosophy but also, recognizing Liberalism to be the historical sum of political Modernity itself, this very political Modernity in general, including its Second and Third political theories (i.e. Communism and Fascism). First and foremost, we are endeavoring to abolish the Cartesian subject represented across all three of the political theories of Modernity with some variations, i.e.:

But what is to be affirmed instead? What should replace these subjects? This question is not an easy one, not only because we are used to dealing with these Western Modern concepts as self-evident and taken for granted, but also because, outside of Western Modernity, there is no single univocal civilization or culture that could provide us a universal substitute for these crossed-out subjects. Every non-Western and non-Modern culture and civilization should normally have its own response valid within its particular theoretical space. Abolishing Western-centrism, we need to accept not one but multiple solutions for this problem of subject.

We have resolved to propose a kind of working, amenable, plural interpretation of the concept of Dasein, or “being t/here” as a general replacement of the subject. The main condition for using this Heideggerian term for Fourth Political Theorizing and constructing the parameters of the Fourth Political Theory is agreeing on the multiplicity of Daseins, where each civilization possesses its own Dasein defined by its own eternal values, its own history, and its existential principles, which can differ from others.

The universal fight against Liberalism, globalism and Western hegemony - hegemony that today is directed not only against the Other, but first of all against the West itself, aiming to destroy in it all that is not liberal or not liberal enough - should thus be led in favor not of a singular alternative solution, but in favor of multiple different subjects (Daseins) proper to each civilization.

That is the philosophical answer, at least. But in political struggle we need something more understandable. In searching for descriptions of Dasein we have come across other, non-Modern concepts of the People, such as narod in Russian, Volk in German, λαός in Greek. The People means not a strict ethnic group or race, but a cultural, spiritual and historical unity based on common destiny, living tradition, and shared values. In Modern Western political ideology, the concept of the People never played a central and decisive role. In the Fourth Political Theory, it returns to its central position. We need to interpret the People not as one more abstraction, but as an existential concept, as a living sentient being - the People as presence in the world, as language, as the community of the dead, the living and those still to be born. The Fourth Political Theory is concerned with the deep, existential question of what it means to be “people” and with the plurality of the world’s Peoples - their Daseins, civilizations, ideologies - that is denied by the political theories of Modernity.

This question is not only a philosophical inquiry; it is of immediate, practical urgency. We cannot help but discern that the disaggregation of liberal globalism is accelerating. The symptoms of this dissolution are eloquently apparent. They include:

We could easily continue this listing of symptoms, and everybody could do so by themselves, adding the types and dimensions of crises facing their Peoples amidst the decline of the structure of the liberal (attempt at) world order. What is clear is that we need a Fourth Political Theory now more than ever. It is not hard to forecast that the general situation and crisis of the only remaining dominant political ideology, Liberalism, is turning into a Third Totalitarianism, and that this trend will continue to develop, grow, and become evermore deadly. We are approaching the end of the Modern (liberal-globalist) World. Therefore, we need to find a way out in order to not be buried under its ruins. We need something outside of the status quo – ideologically, politically, economically, culturally, spiritually, existentially.

With this proposal and set of recognitions, we invite all concerned, interested, and thinking people to take part in the discussion of the Fourth Political Theory, to engage in open, collective Fourth Political Thinking and Theorizing. This discussion and theorizing is absolutely free and open, because it is not an established dogma, a sectarian movement, or a way of thinking claiming universalist value. It is a search, a seeking. We know very well what we reject: the present world and its Liberalism and globalism in progressive decay. We remain unsure of the future alternative and, moreover, we believe in alternativeS, not any one single alternative. We invite all men and women interested in this nexus of critical thinking to speak and listen in this discussion.

We have the unique opportunity to take advantage of the semi-lockdowns still in force to connect people in Fourth Political Theorizing via the Internet. We can try to use the weapon of the Beast against itself. We invite you to the First International Online Conference on the Fourth Political Theory.