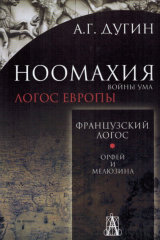 “Noomakhia: The French Logos – Orpheus and Melusinepresents a description of French identity and studies various aspects of the French and, more broadly, Celtic Dasein as manifest in mythology, history, philosophy, cultural, and mysticism.

Since the Middle Ages, France and Germany have acted as the two main poles of the dialectical formation of European civilization, thereby determining the historical, political, and cultural semantics of the most important processes in the history of Western Europe over the past half millennium. In studying the structures of the French Logos, the author arrives at the conclusion that this Logos’ main components are the two fundamental figures (Gestalts) of the Singer of the Sanctified, Orpheus, and the semi-female dragon, Melusine. According to the author, the paradigm of Modernity, in its mythological and cultural roots, can be traced back to the Gestalt of Melusine.”