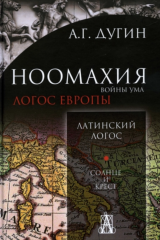 Alexander Dugin, Noomakhia: Wars of the Mind  – The Latin Logos: The Sun and the Cross

“The Latin Logos: The Sun and the Cross, continues Alexander Dugin’s Noomakhia cycle in describing another Western European space in its foundational, unique culturo-historical components – those of the Latin world of Italy, Spain, and Portugal. Having taken shape in antiquity and reached its apogee in the era of the rise of Rome, the Latin Logos became the pole of Western Christianity, determining both the culture of the European Middle Ages and the religious and geopolitical balance of European countries in Modernity as a stronghold of Catholicism, the Counter-Reformation, and conservatism.”