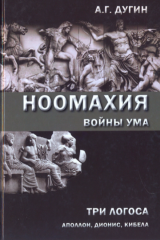 Noomakhia is the struggle in the sphere of the ideal. The author presents humanity as an ensemble of civilizational paradigms which hold continuous dialogue (whether agreement, struggle, understanding, solidarity, or opposition) between one another over the course of all of world history. The panorama of modern humanity presents a diversity of philosophical Logoi, types of rationalities, and mythological matrices – from the European (bringing together Western European and Eastern European components), the Russian, American, Semitic, Iranian, and Indian to the Chinese, Japanese, African and Oceanic (Polynesian). In deconstructing his reflections on the studied material, the author insists that deconstruction should also be accomplished with respect to the observatory point itself.

The first book of the Noomakhia cycle, The Three Logoi: Apollo, Dionysus, and Cybele, is dedicated to studying the question of the multiplicity of the Logoi and philosophical and mytho-symbolic paradigms which define the structures of different civilizations. This book represents the philosophical and methodological introduction to the Noomakhia cycle; it describes the models of the three Logoi – of Apollo, Dionysus, and Cybele – which, in the author’s opinion, lie at the heart of diverse philosophical, religious, scientific, and political systems. From this angle, the author examines in detail the philosophy of Plato, the Neoplatonists (Plotinus and Proclus), Aristotle’s doctrine of categories, Christian Gnosticism, Hermetism, and various forms of materialist and nominalist worldviews.”